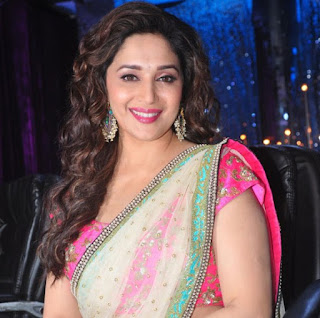 A couple years ago when Madhuri Dixit made an appearance as a judge on the Indian version of Dancing With The Stars, Jhalak Dikhla Jaa, it made headlines! Madhuri had moved to Colorado after getting married and essentially disappeared from view. People were dying to see Madhuri back on screen and what better way than have her as a judge for a popular dance show. Madhuri's love and talent for dance is well known. In fact, Madhuri fans will swear that will never be a dancer like her again in Indian cinema. But apart from being an amazing dancer, Madhuri is also an extremely talented actor. She can capture hearts and tears in a blink of an eye. She is the quintessential Bollywood leading lady - she can act, she can dance and she is gorgeous!

I can't think of any other way to celebrate the contributions of Madhuri than showcasing some of my top 15 favorite songs featuring her.


Never has a star been made with one song! The moment people saw this song, they fell in love with Madhuri Dixit and rest was history! She shined in this song and everyone was touched by her star quality. Every single time I hear this song, I want to join the crowd - MOHINI! MOHINI!


This song highlights Madhuri is a completely different way compared to Ek Do Teen. Here she is close to the traditional Kathak dance style. The song is also very classical in nature. I like how she can pull off the masti dance numbers and at the same time she can also perform traditional dances with just as much ease. I love the way she is able to portray her emotions without being over the top. Just one glance at her and the audience knows that she is deeply hurt.


This is a lovely breezy song performed perfectly by Madhuri. She's dressed in a traditional kholi outfit, which looked wonderful on her. There is no extra fluff or drama. Just Madhuri owning the song and the excellent choreography of Saroj Khan. I loved the whole vibe of the song.


Here's a classic dance battle between the leads! Madhuri challenges Aamir Khan which results in this epic dance battle. I remember how this song was the rage when it first came out. Once again, Madhuri is awesome in this song. She portrays her anger and irritation perfectly without going over the top or looking childish.


Talk about an epic 80s style dance number! Madhuri and Sanjay Dutt rock their butts off in this number. I've never seen Sanjay Dutt dance to this extent in any of his other films. It must have been because of Madhuri's presence! Needless to say, Madhuri rocks this song and owns it. She make the choreography look simple and easy which is the sign of an excellent dancer.


Yet another Madhuri classic. Yet another 90s stage song. I love how this song is simple and yet so beautiful. The lyrics of the song are lovely. Madhuri performs the song very well. Her expressions add so much more to the simple dancing.


Now this is the mother of all sensual songs! After this song came out, Madhuri was officially tagged as the "Dhak Dhak" girl. What I enjoyed the most was that Madhuri was super sexy without being sleazy in any way, a sign of a mature performer. She had the right amount of oomph that the song required and never made it seem cheap or vulgar.


Who can forget this song? This has to be one of the most iconic Bollywood songs. Madhuri owns this song completely. She looks the part and does this song complete justice. Hum Aapke Hain Kaun is a wholesome family entertainer with amazing music. Out of all the wonderful songs in that movie, this one stands out as an instant Madhuri classic.


I remember when this song first came out, every little girl wanted to dance just like Madhuri. Her jatkas, thumkas and her nakhre were amazing! I love the way she tells her story. Even if you don't understand the language, her expressions convey all the emotions perfectly!
Mera Piya Ghar Aya - Yaraana (1995)


Once again Madhuri performs an exciting stance song after Ek Do Teen. As far as I can remember, this movie was not successful but this song was a huge hit. Madhuri's amazing dancing and expressions along with the catchy song made this song an instant favorite.


Madhuri and Shah Rukh Khan sizzled in this song! Who can forget the Aur Paas scene from this movie! Once again DTPH has awesome music but out of all the songs, this one stands out for me. I love the way the song transitions from dance rehearsals to fantasy moments seamlessly. This movie was sort of a redemption movie for Madhuri and she worked every bit of it.
Que Sera Sera - Pukar (2000)


Madhuri and Prabhu Deva together in a song? Yes please! When word got out that Madhuri was going to be choreographed by Prabhu Deva, Bollywood fans lost their marbles. Two of the best dancers in Indian movies coming together was a big deal. And Madhuri did not disappoint! She matches steps with Prabhu Deva effortlessly in this song.

Once again a Madhuri song created interest for the movie. Lajja dealt with the topic of lives of women in India. It featured an ensemble cast which included Manisha Koirala, Rekha and Madhuri among others. This song provided some much needed brightness in the otherwise serious film. Even though Manisha is also featured in this song, without doubt Madhuri owns it!


Those expressions! If looks could kill... Madhuri is amazing in Devdas. She completely embodied the character of Chandramukhi. In fact, I can't imagine any other recent actress doing justice to that role. The choreography of this movie was exquisite and Madhuri does an amazing job in every song. Dola Re which featured Madhuri and Aishwarya dancing together for the first time was amazing but this is the song that highlights Madhuri's talents for me.


After a long gap Madhuri returned to Bollywood with Aaja Nachle. It was a lovely film about a woman trying to bring back theater to her home town. I personally thought the movie was well made and a perfect fit for Madhuri. We see Madhuri demonstrate her latkas and jhatkas for the first time with this song and she does not disappoint. Her dancing was on point, she looked amazing and her expressions were out of the world.


This cheeky song was Madhuri's way to show Bollywood that she could totally pull off an item song. Madhuri takes control and demonstrates how it's done! It was interesting to see Madhuri with Ranbir especially since she's done films with Rishi Kapoor. This just goes to show that Madhuri is like fine wine - she just gets better with age.

Posted by Banannie at 7:01 PM No comments:

Let's Talk About The Item Queens...